A BRIEF HISTORY OF SNOW
IN NEW ENGLAND

The Pilgrims, escaping religious persecution in England, sail the Mayflower to Plymouth, Massachusetts where they found a new land called, cleverly enough, New England. In the great spirit of Thanksgiving, they enjoy a large feast with the Indians, whom they later slaughter when they're discovered to be heathen savages. This leaves the Pilgrims com- pletely unprepared to deal with the first winter, and with no one to help them, they forget they had dealt with horrendously brutal snowstorms back in Europe. Most of them starve.

1623 - Too shy to propose to pretty Priscilla Mullens himself, Plymouth Colony founder John Alden composes a romantic poem entitled, The Courtship of Miles Standish, pretending to propose to Priscilla for a reticent friend. Thinking of a warm body in bed with her on a long cold wintry New England evening, Priscilla is said to have replied, "Why dost thou not speak for thyself, Goodman Alden? And how good is thy snowblower?" 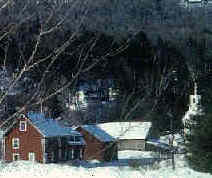 1691 - The Salem Witch Trials are postponed due to a forecast of a chance of flurries in the evening with possible snow showers through the night.

1741 - Connecticut Puritan minister Jonathon Edwards preaches his famous sermon, Sinners In The Hands Of An Angry God to his congregation during one particularly bad winter, depicting God dangling the impenitents over a hellish lake of fire filled with brimstone. When this fails to move his frost-bitten audience, he changes his tack. Next week's sermon is Sinners Crushed Beneath The Mukluks Of An Angry God. His entire congregation rises to their feet weeping and praying, fifteen people are saved that day, and most witnesses admit his piece de resistance was when he thundered, "In this Hell shalt the sinners be cast, where school is forever cancelled and thy children watch Geraldo and Danny Bonaduce and Montel Williams and learn about such things as cross-dressing atheist plumbers and the women who love them!"

1765 - American colonists are enraged when King George III enforces the Snow Act, which effectively taxes them, without representation, on snow shovels, sand and salt, electric blankets, and hot chocolate. The Sons of Liberty begin fomenting dissent and resistance among the colonists who agree it may be time to declare a war for independence, although maybe not until the spring when the roads are better.

1772 - The Boston Tea Party is cancelled due to a prediction of snow that winter.

1776 - Thomas Jefferson drafts the Declaration of Independence where he inscribes, "We hold these truths to be self-evident: That all men are created equal, except for teen- agers during the winter who shall shovel the sidewalks and carriage paths of their elders without complaint." This line is later edited out by 19-year-old Button Gwinnett.

1783 - The British lose the war against the colonies when the redcoats fail to realize that had they attacked during a snowstorm, they would have found the colonies virtually undefend- ed with everyone at the grocery store stocking up on bread and milk and Cap'n Crunch.

1852 - Litchfield, Connecticut's Harriet Beecher Stowe publishes a searing indictment against slavery in her classic novel, Uncle Tom's Cabin. It serves to crystallize militant abolitionist feeling against slavery, and embarrass the hell out of New Englanders when the brave, barefoot slave girl Eliza manages to escape her cruel master and cross a river by jumping across ice floes when most New Englanders have to strap on heavy boots and snowshoes just to get the paper in the morning.

1859 - Charles Darwin publishes his controversial book, The Origin of the Species, where he theorizes that mankind evolved from primitive apes who learned to build fires and live in insulated caves, and that weaker strains of humans, through a process called natural selection, died off due to an inability to adapt to harsh winters. His speculations anger New Englanders, who indignantly respond that they live in the oldest part of the country and know how to handle their winters extremely well, thank you very much. That following winter the first snowfall (0.00008") causes most of the New Englanders to spin out and die in carriage wrecks on I-91.

Also in 1859, Torrington, Connecticut's John Brown, inflamed because he is unable to accomplish a single errand for his wife one winter's day with the entire city shut down due to a snowstorm, goes completely whacko and kills five people in Harper's Ferry, Virginia.

1876 - Hartford's Mark Twain publishes The Adventures of Tom Sawyer, a classic story about an endearing little boy who gets into a lot of mischief because school is always can- celled. In 1889 Twain publishes A Connecticut Yankee in King Arthur's Court, in which a Hartford engineer is hit on the head, finds himself transported back to Arthur's Britain, and proceeds to show the ignorant medieval peasants how a real Yankee handles the winter by panicking, leaving work early, clearing out the video stores, and carrying on about how this is the "biggest blizzard we've seen in, oh, about two weeks!"

1955 - Hurricane Connie sweeps through northwest Connecticut and the Mad River over- flows, killing dozens of people. Survivors are heard to remark, "Well, it could have been worse--at least it wasn't a blizzard!"

1993 - Considering a snowstorm to be a worse threat than mutant alien giant spider beings from Alpha Centauri, Connecticut picks up and moves to Florida for the rest of the winter during the famous Blizzard of '93. Vermonters look around at three feet of snow, scratch their heads in a perplexed manner, and remark, "Geez, the blizzahd must have missed us. Ayup."

1995 - The popular press whips up the state of Connecticut into a frenzy by playing, "Can You Top This?" The game is played this way: One radio station predicts a snowstorm with an expected 6-8 inches. The next radio station predicts 12-18 inches. The next one predicts two feet of snow, and so on, and so on, until eventually someone predicts a snowfall up to the ionosphere. A savvy kid in Winsted figures out that if you take the largest prediction of snowfall, divide by the number of cobweb's in Geoff Fox's brain, and subtract the number of times Doppler radar has failed to predict the arrival of any actual snow, you will get the true number of inches to expect in the next snowstorm.