BRISTOL, CT - I have seen the shape of cyberculture to come at the turn of the millennium, and it hurts. Literally.

As author Mark Dery, a cultural critic whose analyses have appeared in "Wired", "Rolling Stone", the "New York Times", and who edited a collection of essays on cyberculture called "Flame Wars" points out, that's mostly because cyberculture is a Guy Thing. 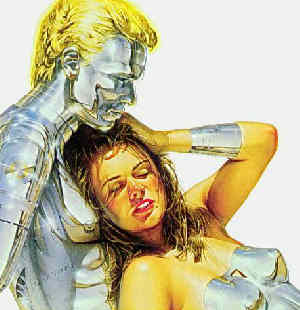 Although his stiff, pedantic style is a bit pompous and tortured at times (one must imagine Mr. Dery flipping through the list of his on-line thesaurus looking for just the right synonym so as not to use the same adjective twice in his book), he has put together a generous overview of the various aspects and genres of cyberculture that those of us who haven't spent copious amounts of hours on the therapist's couch may have missed. "Will the technology we are creating eventually liberate or enslave us?" is the question the counterculture is asking.

If it's not going to ultimately enslave us, the unmistakeable fear pervading its members is that it will.

My own experience with cyberculture is two years on the Internet, three years on BBS's and getting fatally bored a quarter-way through the cyberpunk cult classic "Neuromancer". However, that is only one layer of the increasingly deep culture Dery delves into, which left me thanking God I'm a woman and not likely to go beyond the Internet for adventures in cyberspace, if it's even half of what this book describes.

Divided into six chapters, "Escape Velocity" touches upon the hackers, artists and aficionadoes who gave us the culture of performance art, magazines, older BBS's, movies, books, and music videos and examines what each has contributed to society. In "Metal Machine Music: Cyberpunk Meets the Black Leather Synth-Rockers," we find the first gory expressions of cyberpunk and man's ideas in relation to his machines. I say "man's" because cyberculture appears to be dominated mostly by men, and it was in Chapter 2 here where I first found myself repeating in disbelief, "Only a man could come up with this..."

It's here, for example, where we meet Trent Reznor of the rock band Nine Inch Nails and his sadomasochistic music video "Happiness in Slavery", which was banned by MTV for its gore and nudity. Strapped to a La-Z-Boy of Death, Reznor is impaled with wires, relieved of a small internal organ by a ripping pincer, and his entrails processed by machines (all of which he apparently enjoys). Only a pile of offal remains of him at the end. This, apparently, is supposed to symbolize man reduced to junk by machines, caught in the inescapable clutch of technology.

In "Waging A Tinkerer's War: Mechanical Spectacle," we are treated to the men who bring us absurdist machine wars of political expression, exemplified, like some post-modern monster truck show, by gratuitous scenes of destruction involving imaginative large creature-like man-made weapons. And for them's that likes a human touch in their technological commentary, we bring you Stelarc, in the chapter on performance art, an artist who likes to suspend himself with metal hooks embedded in his body to make his point, and Chris Burden, who had a friend blow a chunk of his arm off in one performance and commented, "[A] guy pulls a trigger, and in a fraction of a second, I'd made a sculpture."

Yeah. Right. This book is *not* for the squeamish.

Of course, if you'd rather make love and not war with your Cuisinart, you can turn to the section on Future Sex and find out, if you haven't tried it yourself already, how to have netsex with someone on AOL or just how expensive and troublesome it can be to masturbate in the twenty-first century. Because cybersex, it seems, won't require a partner anymore, which should make more than a few underlaid cybergeeks deliriously happy. Here we find the android of the future who will, like Data in the old "Star Trek: The Next Generation" TV series, be "fully equipped" to perform *all* human functions. Needless to say, you won't be paying big bucks for these guys to mix your martini.

Perhaps the most depressing aspect of this book is just how many people in the culture, either in the artistic realm or in scientific development, seem to be in need of some serious psychotherapy. Although neither the author nor the denizens he writes of could be described as Luddite, there is a pervading sense of technophobia throughout; and too many, it seems, are completely alienated from their bodies and would be far happier if they could download their consciousness into a mainframe somewhere and never deal with human contact again.

There are very few women here, and the ones who are appear to be mostly female literary characters with the same testosterone-laced neuroses as their male counterparts, conceived of mostly by male writers.

"Escape Velocity" is a great book for anyone interested in the counterculture of cyberspace, but it's a great argument for feminizing the domain a little more. Or, at the very least, calling in a cyborg-psychiatrist.