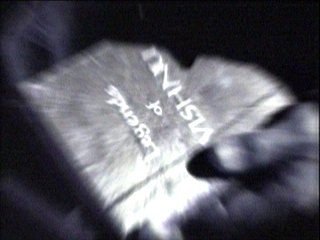 We're not exactly known for watching television here, so it comes as something of a shock to folks that we're fans of Buffy the Vampire Slayer. Nicole was skeptical of my offhand fascination at first (there's a surprise) but now SHE'S the one who can be found over at alt.tv.buffy-v-slayer, speculating on who's gonna date who or get staked trying.

This is not really a fan page -- that's not my style. But it's a page FOR fans. Because it turns out there are a few things on "BTVS" every week that nobody really gets to *see.*

I never liked the idea of having television on my computer. But I thought that it would be kind of cool to *be able* to play around with video editing at home. So I bought a souped-up video card, and that was how I ended up "grabbing" the intro to Buffy. It was something to play with, 45 seconds of something that was fun.

You haven't really watched the intro to Buffy until you've watched it a frame at a time. (This is all from the first season, by the way.)

Above -- no, you don't really see that, in the video. But the hand holding the book, "Legends of Vishnu," flashes by, really too fast to read. I thought it was symptomatic of something I've noticed about "BTVS" from the start -- the creators at least attempt to pay attention to authenticity when they deal with the occult and legends and deities and demons. Sure, they make stuff up. But they try, and it counts.